How to Crush an Outlaw Biker Club: Seize Its … Logo? 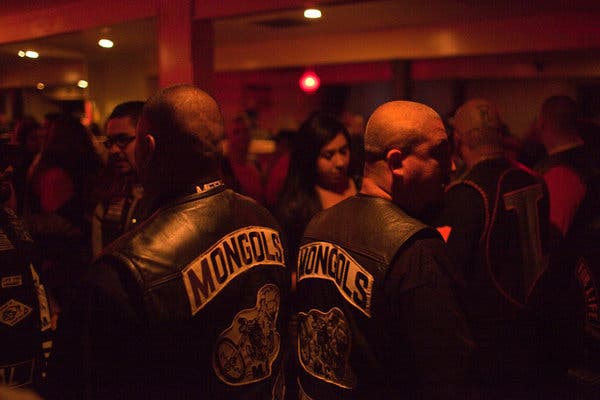 Federal prosecutors want to seize the rights to the logo of the Mongols Motorcycle Club and suppress its use.  Credit Julie Platner for The New York Times

LOS ANGELES — For many years, federal law enforcement authorities have been trying to take down the Mongols, a biker group they consider one of the most dangerous criminal enterprises in the country.

They have infiltrated it with undercover agents. They have hammered members with charges ranging from drug dealing to money laundering to murder. They have conducted mass arrests that resulted in dozens of guilty pleas, including one by a past president.

But after a decade of trying, they have failed to deliver what they view as the coup de grâce: seizing control of the Mongols’ trademarked logo, a drawing of a brawny Genghis Khan-like figure sporting a queue and sunglasses, riding a chopper while brandishing a sword.

Now, in a racketeering trial underway in Orange County, Calif., federal prosecutors believe they have their best chance yet to take the Mongols’ intellectual property, using a novel approach to asset forfeiture law, which allows the seizure of goods used in the commission of crimes.

Prosecutors argue that taking the logo will deprive the group of its “unifying symbol” — the banner under which prosecutors say the group marauds.

If federal prosecutors have their way, one of them boasted at an earlier point in the court battle, the police could stop any Mongol and “literally take the jacket right off his back.”

The Mongols are equally mystified. The logo — also called a patch — is emblazoned on the vests, T-shirts and motorcycles of hundreds of members.

“Lots of brothers have tattoos of the marks on their necks and heads and everywhere,” David Santillan, the national president of the club, said. “How do you regulate that?”

For bikers, the patch is key to belonging and the optics of appearing tough, and members can spend months or even years proving themselves before they earn the right to wear it.

“The patch is like the American flag to these guys and speaks to the identity of the club, the individual and the culture,” said William Dulaney, a retired associate professor who is an expert on motorcycle groups. “Some clubs have the rule that if the colors even touch the ground, they have to be destroyed.”

The Mongols’ marks, like those of other biker groups, are registered with the United States Patent and Trademark Office. Clubs have aggressively protected their patches from unauthorized use.

The Hells Angels have gone after large corporations including Toys “R” Us, the Alexander McQueen fashion line, Amazon, Saks, and Walt Disney, accusing them of infringement on its death’s head logo — a skull in a winged helmet — and other club symbols.

They have usually been successful, reaching settlements that require defendants to cease using the trademarks and to recall and destroy merchandise, among other concessions.

The Mongols have had their share of run-ins with the law. The group was founded in Montebello, Calif., in 1969 and has about 1,000 members in the United States, most of whom are Hispanic. About half of the club’s membership is in California, though Mr. Santillan said 11 new chapters were recently established in Texas.

In 2012 Christopher Ablett, a suspected member of the Modesto, Calif., chapter, was sentenced to life in prison for the 2008 murder of the president of the San Francisco chapter of the Hells Angels, Mark Guardado. In 2014 David Martinez, a Mongols member in San Gabriel, Calif., was charged with murder in the shooting death of a Pomona police officer.

Five months ago, 21 members and associates of the Mongols chapter in Clarksville, Tenn., were charged with a host of crimes including racketeering conspiracy, murder, kidnapping and robbery. 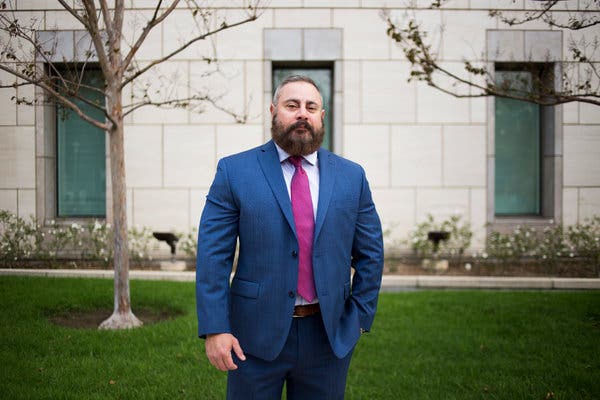 The Mongols say that they are not a criminal operation and that such crimes were largely the work of rogue members who are no longer in the organization. They further contend that some violent acts were committed in self-defense or in defense of others. Mongols, they say, are simply part of a brotherhood who are exercising their constitutional rights by wearing the patch.

“This is a case of guilt by association, an attempt to put the liability on all members,” said Joseph A. Yanny, the Mongols’ lead lawyer. “This is one of the most absurd cases I have seen the government pursue.”

But prosecutors argue that the patch is the flag under which Mongols carry out unlawful acts and intimidate the public.

“The government will show that the marks served as unifying symbols of an enterprise dedicated to intimidating and terrorizing everyone who is not a member,” they wrote in a court filing, “and assaulting and killing those who have sworn their loyalty to other outlaw motorcycle gangs.”

A spokesman for the United States attorney’s office for the Central District of California said he could not comment on the case.

The quest to gain control of the Mongols’ colors began in 2008, when the tactic was suggested by members of the prosecution team at the United States attorney’s office, said Thomas P. O’Brien, who led the office at the time. “We were looking for a way to have real impact and we knew this was going to be a test case,” he said.

The pursuit of the patch was part of a criminal indictment against 79 Mongols that ultimately resulted in 77 guilty pleas. Over the years, the trademark part of the case has been punctuated by conflicting interpretations of intellectual property law, judges overruling their own orders and confusion over who even owns the rights to the logo.

During an early stretch of the case, Judge Florence-Marie Cooper of Federal District Court in Los Angeles granted a sweeping order that authorized the seizure of “products, clothing, vehicles, motorcycles, books, posters, merchandise, stationery, or other materials bearing the Mongols trademark” from members, their relatives and any associates.

In response, some members defiantly flaunted the marks while others wore alternative Mongols logos. After further litigation, Judge Cooper would then rule that the Mongols’ marks were not subject to confiscation. In 2009, Ramon Rivera, a Mongols member who had not been charged with a crime, filed a lawsuit with the help of the American Civil Liberties Union.

Mr. Rivera argued that his First Amendment and due process rights had been violated by the order, and asked that law enforcement authorities be blocked from confiscating his property. He ultimately prevailed and was awarded $252,466 in lawyers’ fees.

In 2010, another federal judge, Otis Wright, preliminarily forfeited the logo to the government after the lead defendant and former club president, Ruben Cavazos, reached a plea deal with prosecutors.

But the Mongols argued that the club, not Mr. Cavazos, owned the rights to the images. Judge Wright sided with the Mongols, “regrettably” concluding that the marks were not forfeitable since they belonged to the organization.

In a somewhat similar case in Michigan, prosecutors withdrew their bid for the Devils Diciples trademark after six members were convicted at trial for firearms offenses, drug trafficking, illegal gambling and other crimes. The individual who owned the trademark, prosecutors had discovered, was not among the defendants.

In a 2016 letter to one of the prosecutors, Fritz Clapp, a lawyer for the Diciples, said that if the government gained ownership of the trademark, it would face a quandary because owners must periodically demonstrate that the mark is still in active use for the purpose registered.

“Unless the government were to use the collective membership mark to operate a motorcycle club, then it could not satisfy the requirement,” Mr. Clapp wrote. “Trademarks, unlike copyrights and patents, have no enduring value apart from their use.”

But in Los Angeles, prosecutors did not give up. In 2013, they came back with a new indictment, this time against Mongol Nation, for many of the same racketeering offenses as were in the 2008 indictments, plus some newer ones. Again, they asked for the forfeiture of the trademarks. The trial is expected to continue for several more weeks.

The Mongols are watching closely, saying they know theirs is a test case.

“They take our patch,” Mr. Santillan, the president, said. “And then they take all the clubs’ patches.”

The Definition of Motorcycle Profiling

"Motorcycle Profiling" means the illegal use of the fact that a person rides a motorcycle or wears motorcycle-related paraphernalia as a factor in deciding to stop and question, take enforcement action, arrest, or search a person or vehicle with or without a legal basis under the United States Constitution.

If you believe you have been

"If a cager does not see you they WILL see me."

Kicked out of your favorite establishment? Fill out this online form.

Stopped for no reason? You have been profiled! Fill out this online form.